An experience with Joomla vulnerability 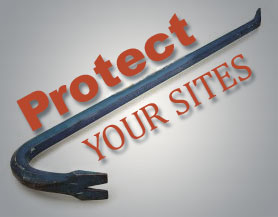 Below is a story of one of the sites that we support being hacked, and the lessons we learnt from the experience. I hope you will be able to learn from our experience, and make the right decisions to prevent such accidents from happening to your sites.

Two months ago we received an email from the site’s hosting provider, stating that the site “has been hacked and used to run illegal software on the server”, for which reason they’ve completely shutdown both the site and its control panel, until we tell them that we’ve made all the necessary preparations to correct the problem — which meant removing the vulnerability that was exploited, as well as taking steps to reduce the chance of any other vulnerabilities.

I need to note that on the site itself, prior to it being shutdown, there was nothing to indicate any problems. All looked fine.

The way the hack was done was by using an insecure request processing in one of the modules used with the Joomla (a Content Management System) on the site. The module, developed by a third party, was not checking one of the possible request types, which could come from any visitor’s browser, for possibility of malicious code. This meant, that some commands could be executed on the server of the hosting by calling the site in question with the following link:

This request should work in the following way — the controller code for the specified module is called, and it is passed the parameters in the call, which get processed by “good” code afterwards. What happened in reality is that the parameters in the request link were not “sanitized” by the code of the module (this is a standard safety procedure, which was left out by the creator of the module by mistake), thus allowing the parameters to contain some “bad” code, which was executed as part of the controller call, before the “good” code was invoked.

Upon receiving the notification from the hosting provider, with the above link information, we took the following vital steps:

After performing these steps, we notified the hosting provider, and the site was enabled again.

One of the things that we also learnt while investigating the threat is that the module used on the site has not been updated by its author for over a year, so it looked risky to continue using it as opposed to something that has more active support and community. For this reason we looked for an alternative that would satisfy the site’s goals and, thankfully, were able to rather quickly find a replacement. Open source community is a great crowd to interact with, and if there is a problem that many people need to deal with, somebody out there is most likely working on a good solution for that problem.

The lessons we learnt from this accident:

And, above all, don’t panic! We hope this information will help you avoid such accidents in the future and, if they do happen, to be able to solve them with least damage to you and your customers.

“We partnered with AlphaTech to build version 1.0 of our B2B SaaS app. We were bootstrapping and needed a cost-effective way to extend our small team. Like everyone, the things we looked for in an offshore dev team were technical chops, data security, and communication skills. AlphaTech checked all the boxes. However, it’s the things you appreciate only after you’ve started working with an offshore team that ultimately matter. Things like source code communications (comments) and reliability. AlphaTech’s developers written English skills are excellent, reducing new developer ramp-up time. Both their developers and team leads were extremely reliable and could be counted on in the clutch. Roadmap is getting acquired, in part, because of the great work done by AlphaTech.”

“CloudPatterns and AlphaTech have been engaged in many successful IT projects since 2000. We appreciate their dedication and expertise and would recommend this company to any potential clients.”