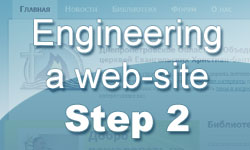 This is the next step in working through an informational architecture process for the Union of Evangelical Christian Baptist churches in Dnepropetrovsk region: interviewing the key decision makers, potential site editors and users.

In step 1 of “Engineering a web-site” series, “Study of the Peers”, I described why I think that designing and implementing a site is essentially an engineering task, and how I looked at other sites with a similar task, and what lessons I learnt from this process.

The main risk to handle was that of me creating a site that nobody will ever want to populate (since that’s not what they needed), and thus it will attract no visitors and will generally serve no purpose. So my next logical step was to talk to those people who could potentially become contributors to the site.

As you may remember, the formal Informational Architecture (IA) process consists of these steps:

We are still on step 1 of that process, defining the goals, yet that’s not something to be discouraged about – I’d rather spend extra time on getting the goals right, instead of making a site that serves no definite purpose.

First of all, of course, I talked with the head of the regional union of baptist churches, and got his opinion on what the site should be and whom it should be for. I was sure to ask who the main decision-maker would be if any issues arise, and was pleased to hear that it would be him – committees can be good for some things, but not for making responsible decisions.

From him I also got a list of all the departments of the union (corresponding to various ministries – Sunday school, church planting, evangelism to prisons, and so on), which had the phone numbers for the person responsible for each of the departments. My reasoning was that these people are in the midst of the events in the union, so they can be a very good source of information and news – it would be great if I could find out their preferences and create a site that would make them excited.

Additional bonus is that these people also represent a part of the future site’s audience, as they could use it to find out what it happening in other departments and other churches, and they could use the site to communicate with their friends and co-workers in the church world. So I could hit two birds with one stone, hopefully not hurting them too much as a result.

Thus began the public part of my work, as before that not too many people knew that a site is being cooked, and now I would suddenly create all these expectations in people. Again, that’s a good thing, having more responsibility actually helps getting things done, and having them done properly.

In all, I spent some lengthy conversations with 12 people, on the phone or in person. The main questions I asked are in the following categories:

When all is said and heard

The summary of each such conversation was recorded in a single “Key Users Interview Notes” document, which is very interesting to re-read after the site is finished 🙂 Each department wishes to have a brief page about them, with possibility to post news or announcements. Everyone wanted a “library” of sorts, though not too many people were sure they’d be able to suggest any actual materials for it. An important idea was stated that it would be good to have a catalog of all the region’s churches on the site. Leader of music ministry wanted to be able to post sheet music, which expanded the idea of “library” to more of a free-form resource center, rather than just a list of articles. One person insisted that a “restricted” part of the site is needed. There would also be photo-heavy reports from different events.

Some people also couldn’t say much, since they don’t use computers or Internet too often, and that was also important to hear – the site would need to be as simple and clear to such people as possible, since they are also an important part of the baptist union, and we wouldn’t want to leave them behind.

My written conclusion at the end of all the interview sessions:

Everyone mainly thinks of making a site of the members of the union itself, providing materials for church members only, and some even think that it is needed only for the ministers – deacons and pastors.

Most popular requests for the site (sorted by subjective importance, taking into account how often a feature was mentioned by different people):

It is also possible to create a section of the site which would be directed at the visitors who are not a part of the union’s churches – yet it is hard to decide how it should be done, as nobody shows much interest in developing it. Perhaps there could be a series of “About Us” articles for such guests, or a separate FAQ page for important questions – this needs to be decided.

My impressions? Very happy, since some of the things these people were saying sounded like a complete definition of functionality, exactly what I was looking for. I needed to define the site’s goals, and these interviews gave me a very good idea. On the other hand, it was very hard to tell who would actually be participating in the site, but several people did show genuine interest, so I was hopeful.

You can find the other articles of the series here:

Coming next: Finalizing the site’s goals, getting a confirmation.

Stay tuned (RSS is so handy for that), and I would love to hear what you think in the comments to this article.

“We partnered with AlphaTech to build version 1.0 of our B2B SaaS app. We were bootstrapping and needed a cost-effective way to extend our small team. Like everyone, the things we looked for in an offshore dev team were technical chops, data security, and communication skills. AlphaTech checked all the boxes. However, it’s the things you appreciate only after you’ve started working with an offshore team that ultimately matter. Things like source code communications (comments) and reliability. AlphaTech’s developers written English skills are excellent, reducing new developer ramp-up time. Both their developers and team leads were extremely reliable and could be counted on in the clutch. Roadmap is getting acquired, in part, because of the great work done by AlphaTech.”

“CloudPatterns and AlphaTech have been engaged in many successful IT projects since 2000. We appreciate their dedication and expertise and would recommend this company to any potential clients.”